Another record quarter for Adslot Media

I’m pleased to report that Adslot Media has delivered a second consecutive, record quarter of both value and volume of media traded on the platform. 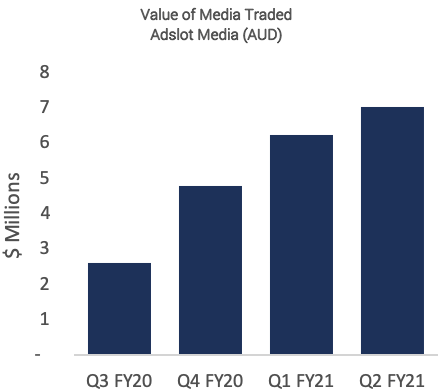 The growth was driven primarily out of the UK market (up +119% QoQ) and via Adslot’s integrated Adslot Media-Symphony platform in Europe (+10% QoQ).

Although the US market didn’t deliver some of the large-scale trades we were hoping to see before the end of the quarter, a huge amount of progress (planning, training and uploading of customer data) was made with more than twenty US agency account teams under current Master Service Agreements in the US.  We expect to see more substantial trade confirmations out of the US in the current quarter.

The volume of trades increased +24% QoQ.

In addition, the Company recently signed two private marketplace agreements (with Flowershop, a media marketplace for the cannabis industry in the US, and a large electronics retail client of Greenlight UK) in recent weeks.  This should also drive trading over coming quarters.

The Company continued to sign new publishers to the Adslot Media platform in the December 2020 quarter, including REA Group, Car Expert and The New Daily in Australia; Hello! Magazine in the UK; and Gallery Media and Glewed in the US. 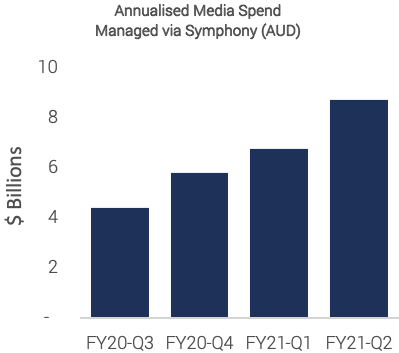 Despite the March quarter traditionally being a significantly softer quarter for media spend globally, we still expect continued growth on the Adslot Media platform in the current quarter, as the launch of new private marketplaces, together with strong agency engagement in the US under pre-existing MSAs, converts to increased trading activity.

Wishing you all a very happy, healthy and prosperous 2021.