I’m pleased to report that Adslot has delivered a third consecutive, record quarter in value of media traded on the Adslot Media platform. 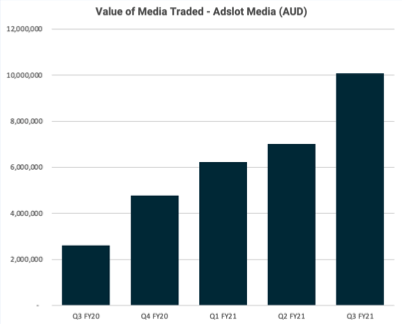 The growth was driven primarily out of the US market (which contributed 44% of the trading value), in what is usually the softest seasonal quarter for media buying.

We were especially pleased to see large-scale trades from Flowershop Media (which was signed and activated in the same quarter), and also from Orion (IPG), under the previously executed MSA.

The result is further validation of the Company’s current execution strategy, which is now delivering consistent quarter-on-quarter trading growth, on its march towards cashflow break-even.

Should break-even be achieved (which is our expectation), and the trading growth continues, this business has the potential to become consistently and highly profitable due to the inherent scalability of the platform.

We remain committed to realising that vision, which is feeling more and more within reach as we progress every quarter.

The full March 2021 Quarterly Activity Report and Appendix 4C can be downloaded by clicking here.